Angular apps are modular and Angular has its own modularity system called NgModules. NgModules are containers for a cohesive block of code dedicated to an application domain, a workflow, or a closely related set of capabilities. They can contain components, service providers, and other code files whose scope is defined by the containing NgModule. They can import functionality that is exported from other NgModules, and export selected functionality for use by other NgModules.

Every Angular app has at least one NgModule class, the root module, which is conventionally named AppModule and resides in a file named app.module.ts. You launch your app by bootstrapping the root NgModule.

While a small application might have only one NgModule, most apps have many more feature modules. The root NgModule for an app is so named because it can include child NgModules in a hierarchy of any depth.

An NgModule is defined by a class decorated with @NgModule(). The @NgModule() decorator is a function that takes a single metadata object, whose properties describe the module. The most important properties are as follows.

A component and its template together define a view. A component can contain a view hierarchy, which allows you to define arbitrarily complex areas of the screen that can be created, modified, and destroyed as a unit. A view hierarchy can mix views defined in components that belong to different NgModules. This is often the case, especially for UI libraries. 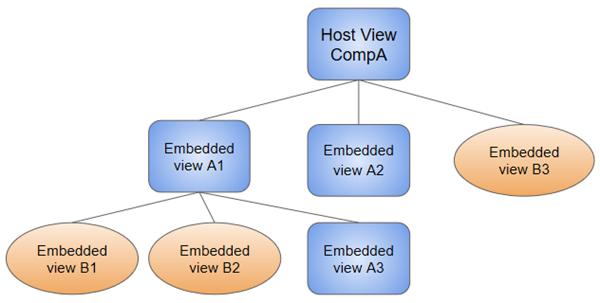 When you create a component, it's associated directly with a single view, called the host view. The host view can be the root of a view hierarchy, which can contain embedded views, which are in turn the host views of other components. Those components can be in the same NgModule, or can be imported from other NgModules. Views in the tree can be nested to any depth.