A component controls a patch of screen called a view. For example, individual components define and control each of the following views from the

You define a component's application logic—what it does to support the view—inside a class. The class interacts with the view through an API of properties and methods.

For example, HeroListComponent has a heroes property that holds an array of heroes. Its selectHero() method sets a selectedHero property when the user clicks to choose a hero from that list. The component acquires the heroes from a service, which is a TypeScript parameter property on the constructor. The service is provided to the component through the dependency injection system.

Angular creates, updates, and destroys components as the user moves through the application. Your app can take action at each moment in this lifecycle through optional lifecycle hooks, like ngOnInit().

Here's an example of basic metadata for HeroListComponent.

This example shows some of the most useful @Component configuration options:

You define a component's view with its companion template. A template is a form of HTML that tells Angular how to render the component.

Views are typically arranged hierarchically, allowing you to modify or show and hide entire UI sections or pages as a unit. The template immediately associated with a component defines that component's host view. The component can also define a view hierarchy, which contains embedded views, hosted by other components. 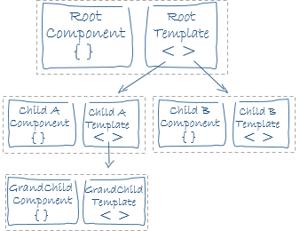 A template looks like regular HTML, except that it also contains Angular template syntax, which alters the HTML based on your app's logic and the state of app and DOM data. Your template can use data binding to coordinate the app and DOM data, pipes to transform data before it is displayed, and directives to apply app logic to what gets displayed.

For example, here is a template for the Tutorial's HeroListComponent.

Angular supports two-way data binding, a mechanism for coordinating the parts of a template with the parts of a component. Add binding markup to the template HTML to tell Angular how to connect both sides.

The following diagram shows the four forms of data binding markup. Each form has a direction: to the DOM, from the DOM, or both.

This example from the HeroListComponent template uses three of these forms.

Two-way data binding (used mainly in template-driven forms) combines property and event binding in a single notation. Here's an example from the HeroDetailComponent template that uses two-way data binding with the ngModel directive.

In two-way binding, a data property value flows to the input box from the component as with property binding. The user's changes also flow back to the component, resetting the property to the latest value, as with event binding.

Angular processes all data bindings once for each JavaScript event cycle, from the root of the application component tree through all child components. 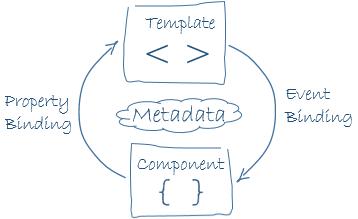 Angular pipes let you declare display-value transformations in your template HTML. A class with the @Pipe decorator defines a function that transforms input values to output values for display in a view.

To specify a value transformation in an HTML template, use the pipe operator (|).

You can chain pipes, sending the output of one pipe function to be transformed by another pipe function. A pipe can also take arguments that control how it performs its transformation. For example, you can pass the desired format to the date pipe.

Angular templates are dynamic. When Angular renders them, it transforms the DOM according to the instructions given by directives. A directive is a class with a @Directive() decorator.

A component is technically a directive. However, components are so distinctive and central to Angular applications that Angular defines the @Component() decorator, which extends the @Directive() decorator with template-oriented features.

In addition to components, there are two other kinds of directives: structural and attribute. Angular defines a number of directives of both kinds, and you can define your own using the @Directive() decorator.

Just as for components, the metadata for a directive associates the decorated class with a selector element that you use to insert it into HTML. In templates, directives typically appear within an element tag as attributes, either by name or as the target of an assignment or a binding.

Attribute directives alter the appearance or behavior of an existing element. In templates they look like regular HTML attributes, hence the name.

The ngModel directive, which implements two-way data binding, is an example of an attribute directive. ngModel modifies the behavior of an existing element (typically >input<) by setting its display value property and responding to change events.