Ionic apps are created and developed primarily through the Ionic command line utility (the “CLI”), and use Cordova to build/deploy as a native app. This means we need to install a few utilities to get developing.

Getting Node and NPM

Most of the tooling in the CLI is based on Node and is managed through npm. The quickest way to get Node and NPM installed on your machine is through the NodeJS installer. Be sure to install the LTS version of Node. Close any terminals/command prompts you may have open, run the installer, and launch a new terminal window. To verify you have everything installed correctly, you can run npm --version and node --version. If this errors, please resolve before moving on.

With Node and NPM setup, let’s install the Ionic and Cordova CLI.

Note: The -g means this is a global install, so for Windows you will need to open an Admin command prompt. For Mac/Linux, you might need to run the command with sudo.

To start a new app, open your terminal/command prompt and run:

Along with creating your project, this will also install node modules for the application, and prompt you if you want Cordova set up.

Along with the tutorial template, Ionic also provides the following official templates:

If you don’t specify a template at the start, you will be prompted to pick one.

Viewing the app in a browser

Now, you can cd into the folder that was created. To get a quick preview of your app in the browser, use the serve command.

I have put my project name "news"

Note: you can clone my repo and get whole code run on your local


you can see this on your browser 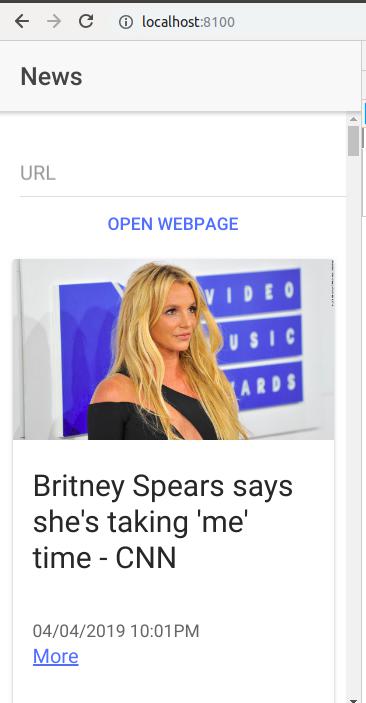 Thank you for reading this article if you want whole code of this tutorial so you can get it from my git repo https://github.com/Bharat12321/ionic-news-app you can directly fork from there & run on your local system.

this will install all dependency on your local

Now if you want to generate the apk for android device to run this application on your phone so you can follow below steps:

:- First make sure to install android studio on your system. you can download it from official website for your os

:- Install java jdk on your machine

:- Make sure you have set ANDROID_HOME & JAVA_HOME correctly after installing them both.

:- Build (prepare + compile) an Ionic project for a given platform

Hurray you can see your apk file in path: platforms\android\build\outputs\apk